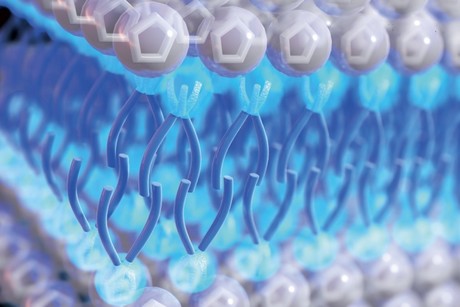 A newly developed class of ionic liquids may store more energy than conventional electrolytes, with less risk of catching fire.

Supercapacitors are electrical devices that store and release energy, requiring a layer of electrolyte to conduct electricity. This electrolyte layer can be solid, liquid or something in between. A collaborative group of researchers from MIT and other institutions has developed a novel class of liquids that may improve the efficiency and stability of supercapacitors, reducing flammability at the same time. The team’s results are published in the journal Nature Materials.

As a result of their investigations, the team of researchers has added a compound to the class of materials known as ionic liquids. The new compound, called SAIL (surface-active ionic liquid), is similar to a surfactant, like those used to disperse oil spills. Lead author and MIT postdoc Xianwen Mao explained that, with the addition of this material, ionic liquids have new and strange properties, such as becoming highly viscous.

“It’s hard to imagine that this viscous liquid could be used for energy storage, but what we find is that once we raise the temperature, it can store more energy, and more than many other electrolytes,” Mao said.

Mao explained that with other ionic liquids, as temperature increases, viscosity decreases and energy-storage capacity increases. However with SAIL, although viscosity remains higher than in other known electrolytes, capacity increases very quickly with increasing temperature. This means that the novel compound can store a higher density of energy than many conventional electrolytes, and with greater stability and safety.

According to Mao, the new class of materials could have a variety of applications for high-temperature energy storage such as in hot environments, including oil drilling facilities or chemical plants.

“Our electrolyte is very safe at high temperatures, and even performs better,” he said. In contrast, some electrolytes used in lithium-ion batteries are quite flammable.

The key to the liquid’s effectiveness is the automatic assembly of its molecules, which line up to form a layered configuration on the metal electrode surface. In this self-assembled nanostructure the molecules line up with their heads facing outward toward the electrode or away from it, and the tail ends cluster in the middle.

This highly ordered structure helps to prevent overscreening — which can occur with other ionic liquids — in which the first layer of ions that collect on an electrode surface contains more ions than there are corresponding charges on the surface. This can cause a scattered distribution of ions or a thicker ion multilayer, thus a loss of efficiency in energy storage. Hatton said, “Whereas with our case, because of the way everything is structured, charges are concentrated within the surface layer.”

Mao said that the material could help to improve the performance of supercapacitors. Such devices can be used to store electrical charge and are sometimes used to supplement battery systems in electric vehicles to provide an extra boost of power. Using SAIL instead of a conventional electrolyte in a supercapacitor could increase its energy density by a factor of four or five, Mao said. He also commented that future supercapacitors may be able to store more energy than batteries, potentially even replacing batteries in applications such as electric vehicles, personal electronics or grid-level energy storage facilities.

According to Mao, the material could also be useful for a variety of emerging separation processes, such as chemical processing and refining applications, carbon dioxide capture and resource recovery from waste streams.

The material developed by the team is just an example of a variety of possible SAIL compounds. The team will continue to work on different variations and on optimisng its parameters for particular uses.

“It is a very exciting result that surface-active ionic liquids with amphiphilic structures can self-assemble on electrode surfaces and enhance charge storage performance at electrified surfaces,” said Stanford Professor of Materials Science and Engineering Yi Cui.

“The authors have studied and understood the mechanism. The work here might have a great impact on the design of high-energy-density supercapacitors and could also help improve battery performance,” he said.

In a world dominated by alternating current, it seems direct current has virtually disappeared...

A battery concept adopting an anode and cathode made of aluminium and anthraquinone could result...

It's time to create the grid of the future, says AEMC

The Australian Energy Market Commission has urged that action be taken to create an energy grid...