Bushfire risk on overhead lines — get it covered 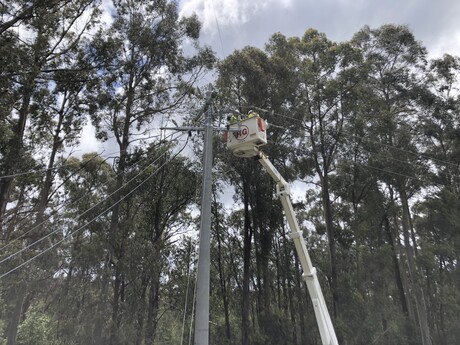 With climate change making hot, dry and windy conditions more likely, utilities need to protect themselves and the public from the risk of bushfire. Steve Rutland, MD of cable supplier amokabel Australia, talks about how to minimise risk by replacing bare overhead lines with covered conductors.

Although sparks (arcs) are rare on any one span of powerline, they can have deadly consequences. Sparking can happen if a tree drops a branch onto an overhead line, if a pole suddenly falls or if high winds cause lines to clash. In hot and dry weather, that could be enough for ignition to happen.

Utility engineers have three technology options to reduce the likelihood of sparking while maintaining continuity of supply for customers.

The first is to install rapid earth fault current limiter (REFCL) devices at substations serving three-phase distribution networks. These constantly monitor for earth fault currents and, if a fault is detected on one phase, they will rapidly shut down current to the fault. This maintains power to customers while reducing the risk of a fire starting. A significant drawback is that it can’t be applied to maintain supply on the 200,000 km of single wire earth return (SWER) lines that span the country. It also does not cover faults caused by lines clashing or other phase-to-phase faults such as a branch falling onto the lines and causing a short circuit. As such, REFCL devices are very limited in the protection that they offer.

The second option is undergrounding. It is attractive as it completely removes the risk of ignition as the lines are buried in the ground. However, it’s also very costly (in good conditions, up to four times as much as covered conductor and it can be significantly higher) and potentially difficult in rocky areas. Therefore, it may be best reserved for the highest-risk areas.

The third option is to use covered conductors for overhead lines. In the past, covered conductors used heavy-duty insulation that meant they were relatively heavy and required upgrading poles and accessories, as well as being difficult to install.

However, a new generation of covered conductor has been developed thanks to a research grant from the Victorian Government following the Black Saturday bushfires in 2009. These use lightweight insulation and can be installed on existing poles, making them suitable for restringing projects.

A study by CSIRO found that covered conductor reduces bushfire risk by 98% and, because it can be delivered at a quarter of the cost of undergrounding, it is the most cost-effective solution available. It also has the advantage of increasing safety for the general public in urban areas, and for wildlife in more rural settings.

Following the granting funding from the Victorian Government, electrical engineering firm Groundline worked with us at amokabel to develop a new type of covered conductor especially for the Australian market. amokabel has many years of making covered conductor for the Nordic countries and we were able to apply that experience, in conjunction with Groundline’s extensive local knowledge, to develop the products for Australia.

In Scandinavia, the thinly spread populations need long powerlines through heavily forested areas; without covered conductors, falling trees and branches would mean regular interruptions to service. amokabel has also been successful with covered conductor in the Middle East, where it protects lines from corrosion and erosion in sandy, hot and salty conditions. They’re also popular in India to protect the general public — and, in some areas, elephants — from live overhead conductors.

However, the big challenge in Australia is that conditions are particularly tough on insulation. Trees have adapted to the climate by developing bark that is extremely tough.

That led amokabel to formulate a special polymer with a tough outer layer that can cope with abrasion that might occur when the wind rubs a tree against a line. It also has enhanced UV and thermal protection so that it will not break down in the intensive Southern Hemisphere sunlight. The design life is 45 years, which is equivalent to bare wire.

Tens of kilometres in operation

Since developing the cable five years ago, we’re seeing demand starting to grow as utilities start to comply with the Black Saturday Royal Commission recommendations.

Initially, utilities in Victoria installed it in pilot projects on short trial sections in order to confirm its suitability in Australian conditions. The first was United Energy, which installed short lengths of around 100 metres at sites in Mordialloc and Cape Schanck with Groundline’s support.

The same utility then went to the Arthur’s Seat area of Mornington Peninsula near Melbourne. This heavily vegetated area has some of the utility’s longest spans at 270 and 330 metres, which elevates the fire risk from conductors clashing and sparking in the wind.

More recent projects are covering longer lengths. Powercor announced in May 2021 that it has upgraded a total of 43 km of overhead line with covered conductor near Geelong and Bendigo.

Seeing the potential for utilities across the country, amokabel has now set up a dedicated subsidiary in Australia. This will enable us to deliver economies of scale, faster response and better service from our new local office. This will make covered conductor an even more cost-effective solution to the challenge posed by bushfire risk and help utilities protect more of the high-risk areas of their distribution networks.

To satisfy the safety requirements of more stringent Australian wiring standards, ABB has...

Square to acquire Afterpay for AU$39bn

Full STEAM ahead with stamp collecting