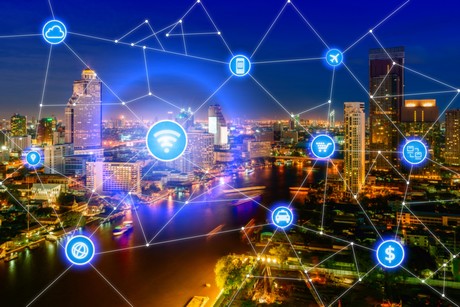 41% reduction in energy consumption on 20-year-old HVAC systems; with an additional 12% made by management decisions supported by analytical reporting.

The offices of the City of Greater Dandenong council had a requirement to replace an ageing building management system (BMS) due to difficulty in accessing and making changes to the 20-year-old HVAC system. The existing system had a lack of visibility by maintenance and facilities staff, causing a major delay resolving problems when air conditioning issues were raised by staff. The system’s power and energy weren’t sufficiently monitored, restricting users to identify problem areas and where energy efficiency could be improved.

Blue IoT developed an award-winning1 custom application suite, allowing City of Greater Dandenong staff and mechanical contractors to access the system remotely via a smartphone, tablet, laptop or desktop computer. The suite includes a high-level overview of all systems, calendar settings, energy dashboards and alarms. The systems integrate through visualisation tools and a data analytics platform with logic and rules set within the cloud platforms.

As the platform is 100% cloud operated, Blue IoT uses multiple telcos for backhaul which reduces the risk of downtime. Should a major telco have an outage, the alternative telco will take over automatically, causing minimal disruption to data collection and analytics. 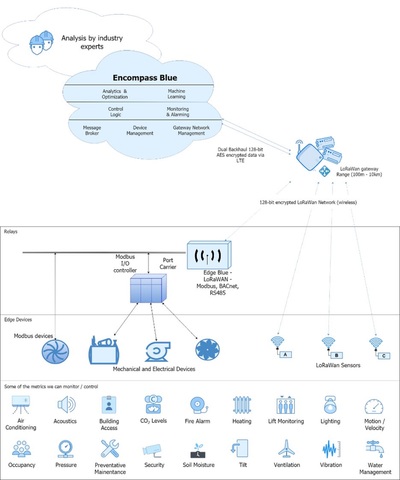 With the lack of power monitoring devices within the building, Blue IoT worked with Socomec to provide a retro-fit power monitoring solution on each of the seven systems the EB smart platform controls. Each system uses three-phase circuits with Socomec Digiware installed on each of the three circuits. These measure all power: voltage, amperage and power factor (energy), to identify any problems within the HVAC system.

Retro-fitting the Socomec Digiware system, Blue IoT and Greater Dandenong staff were able to monitor power usage instantly and identify numerous issues within the HVAC system resulting in the reduction of energy usage.

BlueIoT’s Edge Blue platform and the associated suite of Edge Blue devices, LoRaWAN sensors worked in unison with the Socomec Digiware system to uncover reasons for existing issues and identify hidden issues. Upon commissioning it was evident that one particular air handling unit was not providing the expected cooling capacity. Drilling down further it was discovered that the power factor of that unit was sitting at 0.6, which is below normal. A subsequent diagnostic procedure that involved sequentially activating the compressor stages showed that the second compressor was not drawing any active power. Later, physical inspection revealed that the second compressor was faulty and the fan belt was cracked, delivering only 30 percent airflow.

It was also discovered that two air handling units were consuming energy during after hours when the unit is expected to be off resulting in a 1.4kW draw 24 hours a day, seven days a week. Physical inspection revealed that the fans were not switching off when the unit was commanded to turn off due to a wiring issue in a previous maintenance effort. In both cases the remote operational capability of Encompass Blue synergised with the high accuracy and reliability of the Socomec Digiware system which expedited troubleshooting and mobilised contractors on the ground only when the issue is identified, saving time, money and energy.

Bob Sharon, founder and chief innovation officer, Blue IoT said, “Integrating Socomec Digiware with our world’s first virtual smart building and environmental platform (EB) was the right choice for this purpose. We needed a product that integrated with ease, provided a high level of accuracy and is manufactured to a high standard. Socomec has all this, along with an outstanding reputation. It met all the requirements to ensure the EB platform captured accurate data for the client.

“The level of service provided by IPD and Socomec meant we were able to deliver a seamless installation for the client and provide instant feedback on current faults within the HVAC system, allowing the client to rectify these quickly and efficiently. Our existing relationships with the IPD team, meant the entire process of specifying, designing and installing the Digiware system was effortless and we knew we were able to deliver the correct solution for the client.”

Bob added, “The last major rectification works to the HVAC systems, which Blue IoT identified as necessary, were completed during February 2019. This meant March 2019 was the first full month of savings.

“Compared with the same energy bill period in 2018 for March to June, the overall savings for four months post rectification work was 21% of kWhs of the total electric bill and 47% of HVAC kWhs.” 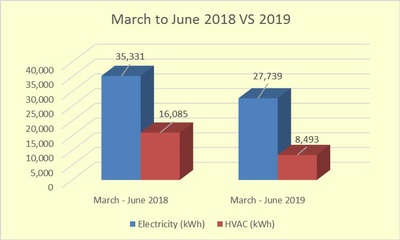 As an industry, LED lighting continues to power ahead as the world finds new ways to use the...

In the process of digitalising industrial lighting technology, we must not forget to shine a...

How to make your home more energy efficient

We'd all like to make our homes more energy efficient, but where to start? Sometimes the...