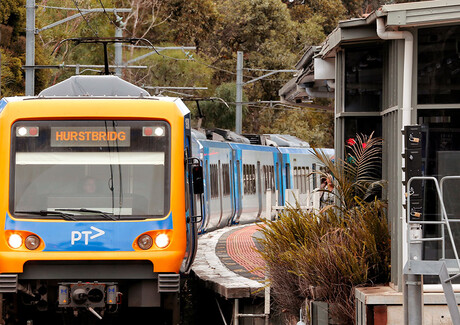 Imagine a system that gathers the energy from a braking train as it approaches a station, briefly stores it, then reinjects it into the train’s power supply as it accelerates on its way. Such an energy redistributor has been applied as an alternative to building and connecting a new rectifier substation on the Metro Trains Melbourne (Metro) Hurstbridge Line Upgrade Project.

The Australian-first application of ABB’s 1500-volt DC ABB Enviline Energy Storage System (ESS), which not only stores but also returns the surplus braking energy back to the grid, will allow the Metro service to make more efficient use of electricity, increasing its sustainability and allowing it to add extra trains at a lower than usual cost. Passengers will also experience a smoother ride (no more spilt coffee).

The pilot project, completed six months ago, had to negotiate several obstacles on its three-year journey to completion. ABB engineers Stephen Poh, Product Marketing Manager of AC and DC Traction Power, and Steven Dineen, Lead Project Engineer, together with the ABB factory team in Bielsko-Biala, Poland, worked tirelessly with the customer to drive the project home.

When Metro first tendered the project on the Hurstbridge Line in 2017, ABB had already been engaged in working out what kind of solution would best be applied to the gap in energy supply around Diamond Creek, between Wattle Glen and Eltham on the Hurstbridge Line. Pre-pandemic, Diamond Creek Tie Station had experienced frequent voltage drops to which Metro was seeking a solution to provide customers with a smoother journey. Metro also wanted to increase the frequency of trains on the line, which would increase the requirement for more reliable energy at Diamond Creek.

One option to overcome the issues of power quality and voltage sag faced by Metro was to implement an energy management system rather than building a traditional traction substation. With a 15% reduction in carbon emissions achieved by recycling otherwise-lost energy in the grid, and the ability to supplement electricity drawn from the grid, an energy management system was clearly the best option for Diamond Creek. ABB was awarded the project based on its strong local presence in Australia, which would enable easy collaboration, and because of its experience with this technology.

ABB had previously developed energy storage system (ESS) solutions for 750-volt rail lines in the US and Europe, but in the southern states of Australia, mainly Victoria and New South Wales, rail lines run on 1500 volts. “For this high-capacity, high-voltage environment we needed to engineer a 1500 V version,” Poh said.

ABB’s ESS subject matter experts were based in the Polish Technology Centre and worked for 12 months with the engineering team in Australia, developing and testing a 1500 VDC energy storage system using supercapacitor storage with 44 MJ capacity, which met Metro requirements and applicable standards.

The energy storage system recovers and stores braking energy from decelerating trains and makes it available again for acceleration, reducing overall energy consumption and operating costs. When trains brake, their kinetic energy is converted into electricity and returned on the traction power line. Most of the time, onboard loads and distant trains can only take a portion of this energy, and the surplus is wasted into resistors. ABB’s ESS captures this braking energy and returns it milliseconds later to sustain the acceleration of other trains that transit later in the same line section. 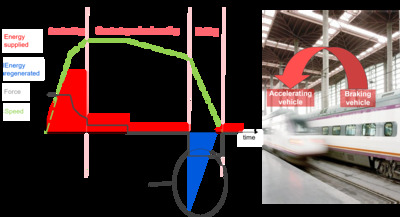 Trains also draw peaks of power during their acceleration. This causes potential voltage drops that can lead to performance problems, causing a delay in the train’s operation and resulting in large demand charges and peak power penalties from the utility company, especially during rush hour. Because it returns the energy during the acceleration, the ESS limits the power drawn from the grid and sustains the voltage level along the rail line. This reduces the demand charges as well as peak power penalties and can also be used in some cases as an alternative to avoid or defer potential capital investments for new traction substations and additional contracts with utility companies.

The Australian drive towards supersafety

Metro subsequently requested a higher level of safety for its maintenance employees. “When you’re working on this equipment, you need to make sure everything is turned off, so you know it’s safe to go in and work on it,” Dineen said. Internationally, such earthing systems have been manually operated, but for Metro this posed a high risk. Instead, Dineen said, “Metro requested that we incorporate automatic earthing switches into the design of the ESS, so that the equipment earths itself at the flick of a switch.”

ABB took Metro’s feedback on board and redesigned the energy storage system. It procured unique parts — “We created a 20-page specification just for the innovative automatic earthing piece,” Poh said — and engineered a new system, integrating the highest level of safety to meet Metro needs. The equipment then had to go back into the manufacturing phase and into its own testing phase.

With the COVID pandemic came the challenge of onsite installation and testing that would normally involve ABB’s Polish team together with local ABB experts. Instead, ABB initiated a virtual commissioning process to allow all parties, including Metro and overseas colleagues, to remotely conduct the operation.

“The process of organising a midnight-to-dawn tuning run with rolling stock, train drivers, controllers and so on had begun, when countries started shutting their borders in response to the COVID-19 pandemic. Our Polish team had young families and couldn’t be stuck in Australia indefinitely,” Dineen said, “so they rushed back home, and we began working out how we could commission the system with them remotely supporting the necessary procedures.”

In the first half of 2021, the system was commissioned, and late last year the ESS was connected to the Hurstbridge Line’s network. “Not a moment of the three years plus of assessment and engineering has been in vain. Both the original Enviline 1500 V global-standard ESS and the unique ultra-safety-enhanced system are now fully tested to meet Metro requirements,” Poh said.

On track to maximise returns

Poh and Dineen pointed out that several factors will maximise the returns on investment of a substation substitute.

One consideration is that a substation substitute generates the most energy at stations where the train must substantially apply its brakes as it approaches the platform — so flat or curvy approaches will limit the energy generated. The Enviline ESS can capture up to 30% of otherwise wasted energy, which can represent a significant saving on electricity otherwise drawn from the grid. “And of course, if your line or network has the right conditions for 10 of these, you get 10 times the benefits,” Poh said.

Metro will continue to study its network demand to identify more business cases for the use of the energy management system, and the static energy storage system Enviline ESS will continue to evolve in response to customer needs. “Metro may decide it would love the system even more if it had expanded storage, so that the energy captured could be directed to power multiple needs,” Poh said.

The FIMER PowerUNO, PowerTRIO and PowerX inverter and storage platforms are designed to help...

The ABB Terra 360 all-in-one electric vehicle charger is a modular charger which can...

The SolarEdge Synergy Inverters are three-phase commercial inverters designed for for rooftop,...