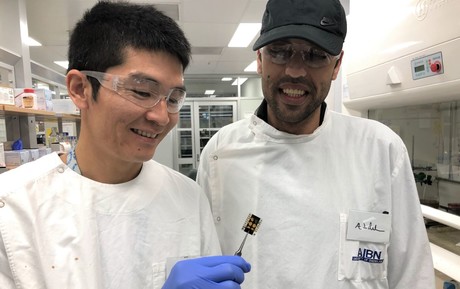 Professor of Clean Technology Colin Raston, Dr Kasturi Vimalanathan and Dr Gibson from the Flinders Institute for Nanoscale Science and Technology are part of the team looking to improve solar cell efficiency with alternative and improved solar cell materials and processing systems.

“Silicon is currently the standard for rooftop solar and other solar panels, but they take a lot of energy to produce. They are not as sustainable as these newer options,” said adjunct Prof. Shapter. “Phosphorene is an exciting material because it is a good conductor that will absorb visible light. In the past, most nonmetallic materials would have one property but not both.”

“Our latest experiments have improved the potential of phosphene in solar cells, showing an extra efficiency of 2–3% in electricity production.”

Research into the large-scale production of high-quality 2D phosphorene — along with other future materials such as graphene — is underway to explore efficient and sustainable production with the use of the VFD, near-infrared laser light pulses and even an industrial-scale microwave oven. The work with phosphorene is exploring the addition of different atoms to the matrix, which has generated promising results in catalysis, particularly in the area of water splitting to produce hydrogen and oxygen.

With the ability to artificially produce perovskite structures, and once production of the PSCs can be successfully upscaled, commercial viability is closer to being realised. Meanwhile, global research continues to investigate how to improve and optimise perovskite cell performance.

The findings were published in the journal Small Methods.

A next-generation solar cell that can maintain efficiency in the heat has been developed by...

Material that could be used to create organic light-emitting diodes (OLEDs) is currently under...

A solar chimney that is optimised for energy saving and fire safety has been designed by...