Building a low-cost solar cell that is both highly efficient and simple to construct has thus far proved elusive for scientists and engineers. However, a research team from Empa, the Swiss Federal Laboratories for Materials Science and Technology, has made a major leap forward.

The researchers have presented a new technique for manufacturing high-efficiency, flexible thin-film solar cells from CIGS (copper indium gallium di-selenide) semiconductors. As the solar cells are deposited onto plastic foils, they could be produced on an industrial scale using cost-effective roll-to-roll manufacturing. 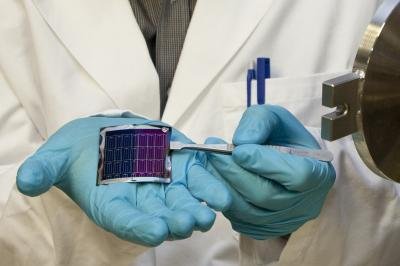 In the manufacturing process, tiny quantities of sodium and potassium are incorporated into the CIGS layer. The special treatment alters the chemical composition of the complex sandwich structure - thereby altering its electronic properties, as confirmed by various methods including detailed electron microscope investigations.

The new method has enabled the team to significantly increase the energy conversion efficiency from sunlight into electricity using CIGS thin-film solar cells on flexible plastic foils to a new record level of 20.4%, representing a marked improvement over the previous record of 18.7% established by the same team in May 2011. This finally enables CIGS cells to compete with the best polycrystalline silicon cells.

Details of the new method have been published as an Advance Online Publication in the journal Nature Materials.

A new technique to identify defects in silicon solar cells is being explored by researchers.

D2N reaches for the skies with Hytera radios