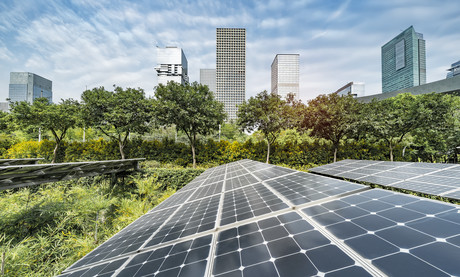 Renewable energy potential has been boosted by the creation of a new chemical compound by researchers at West Virginia University.

The compound is a photosensitiser, meaning it promotes chemical reactions in the presence of light. It has many potential applications for improving the efficiency of modern technologies ranging from electricity-producing solar panels to mobile phones.

These technologies currently rely on precious metals, like iridium and ruthenium, to function. However, only limited supplies of these materials remain in the world, making them non-renewable, difficult to access and expensive.

The study, published 16 March in Nature Chemistry, was conducted by researchers in Assistant Professor of Chemistry Carsten Milsmann's lab, with support from his National Science Foundation CAREER Award.

"We noticed that there have been few efforts in studying the more abundant metals titanium and zirconium because they are often not as easy to work with. Precious metals have always been the go-to elements because of their favourable chemical properties that make them easier to use and study, and that's predominantly how it has been done in the field," Milsmann said.

"We're hoping to change that."

Milsmann's compound is made from zirconium, which is much more abundant and easier to access, making it a more sustainable and cost-effective option. The compound is also stable in a variety of conditions, such as air, water and changes in temperature, making it easy to work with in a variety of environments.

Since the compound can convert light into electrical energy, it could be used in the creation of more efficient solar panels.

Solar panels are typically made using silicon and require a minimum threshold of light to collect and store energy. Instead of using silicon, researchers have long been exploring the alternative of dye-sensitised devices, in which coloured molecules collect light and function in low-light conditions. As an added benefit, this also allows the production of semitransparent components. To date, the necessary dyes rely heavily on the precious material ruthenium, but Milsmann's new compound could potentially replace it in the future.

"The problem with most solar panels is that they don't work well on cloudy days. They are pretty efficient, inexpensive and have a long lifespan, but they need intense light conditions to function efficiently," Milsmann said.

"One way around that is to make dye-sensitised versions where a coloured compound absorbs light to produce electricity in any weather condition. In the future, we could design buildings that produce energy, essentially making the facade of your building, including all of its windows, into a power plant."

On the flipside, the compound could also be used in organic light-emitting diodes, which convert electrical energy into light, essentially reversing the function of a solar panel. This characteristic makes the compound a potential light source for producing more efficient mobile phone screens.

"Many [mobile] phone displays contain iridium, another precious metal compound that does exactly what our compound does," Milsmann said.

"The advantage of having a light-emitting diode is that most of its energy is turned into light. In the past, light sources were inefficient because they only turned a small fraction of the energy they received into light."

A next-generation solar cell that can maintain efficiency in the heat has been developed by...

Material that could be used to create organic light-emitting diodes (OLEDs) is currently under...

A solar chimney that is optimised for energy saving and fire safety has been designed by...