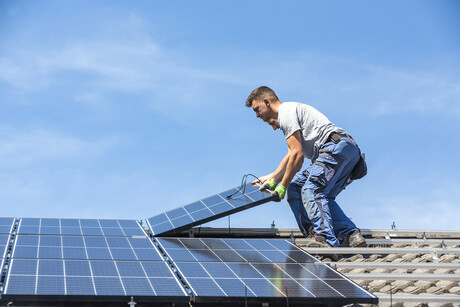 Changing the positioning of solar panels could increase the amount of energy that they generate, according to new research.

Over two million Australian households — more than 20% — now have rooftop photovoltaic (PV) solar panels, and while this is a generally positive scenario, the increased uptake of PV systems around the nation is creating a few challenges for the electricity industry.

UniSA solar researcher Kirrilie Rowe said one key problem currently facing home PV stems is the discrepancy between the times of peak use and peak production.

“Solar panels on residential dwellings are typically installed facing the equator to maximise the energy collected, but the power generated by an equator-facing panel peaks at around midday, whereas residential loads typically have peaks in the morning and afternoon,” Rowe said.

At the moment, households are paid a ‘feed-in tariff’ for excess electricity they send to the grid, but, as the number of homes producing electricity increases, the viability of exporting to the grid is reduced.

“In some markets at certain times we’re already seeing over-supply during peak production times, which can cause grid instability and is leading to reductions in feed-in tariffs,” Rowe said.

“The real challenge now facing the solar industry is finding ways to balance production and consumption by maximising self-consumption for the solar panel owner.”

Offering one elegantly simple solution to this challenge, Rowe’s research explores how rethinking the orientation of rooftop solar panels might better match times of production to patterns of consumption, even if that means a slight reduction in overall energy generation.

“Traditionally, PV panels are mounted facing the equator as this creates more energy per square metre of PV panels, but this orientation does not necessarily maximise the community self-use of the energy prior to the excess being exported to the wider grid,” Rowe said.

“By orienting panels in different directions rather than just facing the equator, it’s possible to minimise the shortfall between load and generation.

A recent study by Rowe and Associate Professor Peter Pudney calculated the optimal self-consumption panel orientations for a community of 29 individual dwellings and a residential building with 42 apartments in Australia.

“Our analysis uses detailed load data and detailed irradiance data and shows that optimal panel placement for self-consumption is never towards the equator,” Rowe said.

“In both cases, if the panel area is small enough so that the household will not export, then facing the panel north is best. But as panel area increases, it becomes better to face the panels facing north-west to meet the afternoon loads, and if even more panel area is available then panels should be faced north-east and west.”

Over the next few years, as solar uptake increases, feed-in tariffs fall and the cost of solar batteries remains prohibitive, the real value of solar self-consumption will continue to rise.

The strategy developed by Rowe and Associate Professor Pudney offers a simple approach to improving self-consumption without increasing set-up costs on new PV systems, and the method could also be easily adopted for remodelling existing systems.

“The information on how to orient solar panels to minimise power shortfall is useful to groups developing housing precincts and has been used to design a renewable energy system for a retirement village with 24 dwellings,” Rowe said.

“Future work will incorporate energy storage into the model.”

The price of storing renewable energy as heat could be reduced by new heat-harnessing...

Coal-fired power stations could be converted to run entirely fossil fuel-free by using a new type...

A molecule that absorbs energy from sunlight and stores it in chemical bonds has been developed...

ABB partners with UWA for the future digital mine

Manufacturing in the new normal

New Fire-Retardant Ensembles and Fireboot in development for Workwear Group