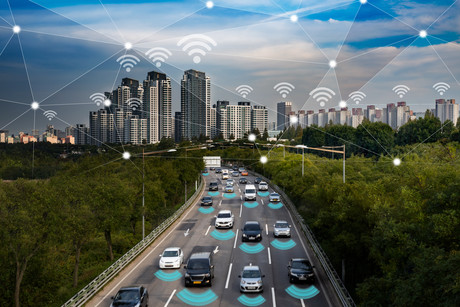 These two presentations set the tone for the conference by stressing the importance of the infrastructure — the optical fibre, the wireless networks, the copper comms cabling, the power reticulation, the enclosures — that actually enable cities to be made ‘smart’.

Emphasising this point, Professor Sarvi cited the significant global shift in thinking amongst proponents of autonomous vehicles. He stated that car manufacturers initially focused on vehicle-to-vehicle communications for safe and efficient movement. But in their trials, they quickly realised this wasn’t enough — vehicles needed to be connected to their entire environment with information being shared with a plethora of stationary devices and systems. So the current global focus is on vehicle-to-infrastructure communications, a view that the university had long advocated.

The remainder of this article will convey just some of the compelling initiatives, statistics and vision presented by these two speakers at the BICSI conference on where smart cities are going and how essential infrastructure is to their successful adoption.

The Smart City Council defines a smart city as “one that uses technology and data to accelerate liveability, workability and sustainability”. It becomes an accelerator of productivity, wellbeing, opportunity, and economic and societal change.

Consider just some examples of the remarkable uptake of digital technologies that demonstrate the potential improvements:

2.2 billion parcels ordered online are expected to be shipped annually in Australia by 2022, with over one million parcels being sent per business day in Melbourne and Sydney alone. That’s a 15% growth for Australia projected in just three years. And how are parcels collected/delivered? 7% off street parking, 3% in driveways, 13% in metered parking, 10% parked in loading zones and a whopping 33% double parked. Think of the impact that this has on traffic alone! Demand is projected to soar as online procurement matures to become the norm for many domestic and commercial transactions. Central to this is reliable internet access in both fixed and mobile environments, afforded only by infrastructure commensurate with the burgeoning demands.

While Uber changed the taxi industry forever, the concept also massively transformed our food industry with food deliveries. Over 500 restaurants and cafes in Australia have created ‘virtual restaurants’ on the Uber Eats platform, and they have seen an average 30% growth while using existing facilities.

Adam Beck cited the ‘On Dijon’ program in France as an excellent example of an entire city committed to a digital transformation. Its vision is to create the metropolis of the future — intelligent and connected. Its objectives are to optimise and consolidate urban equipment (eg, traffic signals, street lighting, surveillance cameras, environmental sensors, etc) to facilitate the management of public space.

Among the major factors of economic and societal change, digital is undoubtedly the most powerful. Dijon Metropole and the City of Dijon conceived and imagined the city of the future through a resolutely innovative and structuring project for the future of the region.

On Dijon relies on an innovative investment-leveraging effect: modernising public services and equipment, especially installing 100% LED lighting, to generate savings, which in turn allow new digital services to be funded. Connectivity is also a vital element, with plans for extensive deployment of micro-datacentres connected wirelessly and via optical fibre for reliable, low-latency integration of services that had until now been largely disparate and therefore inefficient.

Professor Sarvi started his presentation by stressing the significant benefits autonomous vehicles will bring to the community as part of a truly smart city in comparing machine-controlled vehicles to human-controlled vehicles. In addition to being able to communicate with other vehicles and infrastructure continuously and more efficiently than humans, machines also react quicker than humans; don’t get tired, distracted or drunk; and can ‘see’ more than humans, thereby contributing to safer mobility.

But all of that requires constant and reliable connectivity. In the vehicle-to-vehicle space, vehicles will typically share their location, vector and intention using DSRC (dedicated short-range communications) short-range to medium-range wireless communication channels in the 5.9 GHz band specifically designed for automotive use and a corresponding set of protocols and standards.

At the same time, vehicles will communicate with fixed ‘road-side’ infrastructure over DSRC and cellular (4/5G) sharing information such as road and weather conditions, traffic incidents, etc. Some of the technologies that will be deployed to facilitate this communication on a large scale include radar and stereo cameras for 3D vision; LiDAR — light detection and ranging; object and sign recognition; and telematics — location, GPS mapping, connected car.

Professor Sarvi concluded that the future of transport will be personalised, automated, connected and electric. But he cautioned that, to address the migration from human-controlled to machine-controlled vehicles, the industry should focus on the transport problems and what customers want and not what technology can provide. If truly autonomous vehicles are to be a possibility in the near future, they would need to cope with today’s cars and infrastructure through an extensive transitionary period.

At a higher level, governments and infrastructure operators would need to transform their mindset from ‘building roads’ to ‘providing mobility’.

In exploring this migration, the University of Melbourne developed the Australian Integrated Multimodal Ecosystem (AIMES) — a multimodal urban testing ecosystem for implementing and testing of emerging connected transport technologies at large scale and in complex urban environments. AIMES covers more than 100 km of road network over an area of 6 km2 and is densely instrumented with over 250 intelligent sensors to provide data to AIMES.

The AIMES test-bed has as its goals the development of a common vision and roadmap for deployment; the development of system-wide pilots; and to facilitate collaboration between government, industry and academia. Ultimately, intelligent transport systems will make urban transport safer, cleaner, efficient, sustainable and integrated; provide better strategies and policy-making for automated vehicle and smart infrastructure; and support and facilitate emerging technologies and quantify what the connected transport network of the future will be.

As aspirational and transformative as these and other smart city initiatives are, the inescapable fact remains — dependable ICT infrastructure is critical to their success.

This message was stressed throughout the BICSI conference, emphasising the need for the industry to be skilled in its deployment of current technologies and to build their knowledge about future applications and technologies — something that all BICSI conferences facilitate for its members and the ICT industry.

Reliable, quality power will continue to play an important role in 2020, as it does every year in...

Improving operational performance by bringing people back into data centres

Over the past decade, industry response to human error has been to reduce the number of humans...