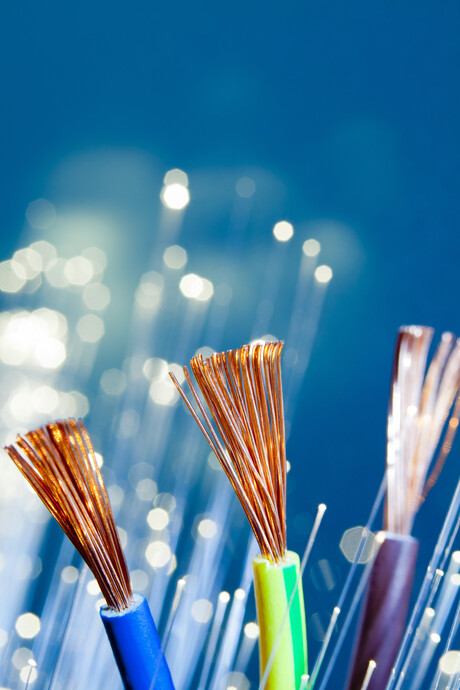 When it comes to new technology, there have been some great battles over the years. Records vs cassettes, CDs vs MP3 players, fax vs email. The list goes on.

We all had our favourites — and watched them slug it out until one seemed to prevail. The winner took the heavyweight belt in the form of popularity, while often the losers slunk off and retired quietly, never to be heard of again.

But it doesn’t always happen like that. In the world of networking infrastructure, there are three contenders for the crown: copper, singlemode fibre and multimode fibre. There may never be a clear winner, and this fight has many divisions: the lightweight low-speed short-reach networks and the heavyweight high-speed long-reach networks. There are many winners in each of these classes.

Let’s size up the fighters. Copper is the seasoned performer — the journeyman fighter who seems to have been around forever. In its class (distances up to 100 metres and speeds up to 10G), it is usually considered a sure bet. It is familiar, well understood and well liked. Our old champion.

The fibre contenders each have their strengths too. Singlemode is the distance specialist: although it may demand more maintenance, more complex and expensive electronics, and more power than multimode fibre, it is an extremely strong performer where distance and speed are most important.

And then we have multimode fibre. Again, a strong supporter of higher data rates with shorter network distances. It is often considered to be more robust than singlemode, which may have the ‘glass jaw’ of being more susceptible to dirt. With multimode, it is inherently easier to keep connector interfaces clean. It has a powerful low-cost punch that makes it the favourite for many data centre (DC) applications.

Who is the favourite?

They each have their strengths, but that is the very reason this title fight may never happen — and why we should be glad of it. The technologies are complementary and, while some companies with vested interests may always promote their favourite, most networking decision-makers are probably of the opinion that a combination of all three is sensible.

It seems likely that copper is going to serve lower-speed and very short-reach applications, and multimode will have the short-reach low-cost application space, while singlemode will win the long-distance battle. CommScope don’t have to make a choice in this fight, since we produce solutions and cables for all three. It’s clear to us there may never be a clear winner, and that’s excellent news for network planners who can continue to use each medium where it is most suited. And we are delighted to help them do so.

Relatively unexplored semiconducting materials could be used to provide the telecommunications...

A large increase in internet and mobile usage has created a greater need for cost-effective...