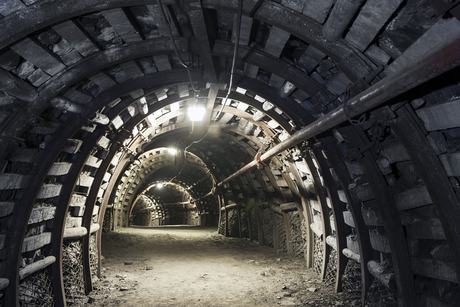 Underground communication networks are the critical link between operations underground and personnel at the surface. Mines are constantly changing and the mining process is highly mobile. As the operation has advanced, equipment and people are constantly moving. The potential for explosive gases, rock falls, wet locations, temperature extremes, confined spaces, high voltage and electromagnetic interference are a few of the hazards the underground network must survive. Furthermore, the demands on the network have increased through convergence of data. By adding surveillance video feeds, sensor data, miner tracking data, machine control signals, mine phones and production data to a singular network, the need for bandwidth over a distance which grows daily has become paramount to effective underground operations. Fibre-optic networks offer a reliable solution for underground mine communications. Optical fibre systems are also capable of handling the convergence of data over long distances. Designed to be modular for ease of maintenance and expansion, and portable to facilitate changes in the network infrastructure, optical fibre systems enhance safety by eliminating spark hazards found in conventional copper cabling solutions. Optical fibre systems are readily available and easy to deploy and maintain. In this article, we will review the basics of optical fibre, cable and connection systems for use in underground mines and show how these elements are specified and deployed in an underground installation.

Fibre-optic communication systems use pulses of light to transmit data. First developed in the 1970s, fibre-optic systems have revolutionised communications in our modern world. Massive amounts of data are successfully transmitted via fibre optics every day. From online transactions and internet searches to live HD video feeds transmitted around the globe, fibre-optic communication systems are at the core of the modern information age. The process of communicating over fibre optics involves only a few basic steps. First, the data must be converted to light. Second, the encoded light pulse is transmitted over the fibre-optic network. Finally, the light pulse is converted back into a conventional electronic digital signal. Transmitting and receiving optical signals is accomplished through readily available transceivers that use devices such as light emitting diodes (LEDs) and vertical cavity surface emitting lasers (VCSELs), a form of laser diode commonly used in fibre-optic transmission systems.

The fibre-optic network consists of several components including optical fibre, optical cable and optical connecting systems. Optical fibre is a very thin strand of glass that is used to carry the light pulses from the transmitter on the sending side to the detector on the receiving side. Optical fibre consists of three basic layers — the core which is the glass region where the signal travels; the cladding which is a glass region that traps the signal in the core; and a polymeric coating or primary buffer that provides a basic level of protection to the fibre while it is being further processed. Transmission of light through an optical fibre works through the principle of total internal reflection. By changing the index of refraction of the glass in the core compared to the index of refraction of the glass in the cladding, the transmission path the light takes as it travels through the fibre is prescribed. By controlling the angle at which the light is coupled into the fibre, the cladding can effectively act as a mirror and completely reflect any light that tries to escape through the cladding. Figure 1 illustrates this phenomenon.

Traditionally, underground mining networks have used multimode optical fibre. Multimode fibre, as the name implies, allows multiple modes of light to travel along its length. This type of optical fibre has a larger core diameter and accepts light coupled from a larger angle and from a broader spectral source, such as an LED. Multimode fibre offers plenty of bandwidth to support Ethernet protocols over short distances and is more than adequate for signalling for machine control and miner tracking over short distances. The core size of multimode fibre is commonly 62.5 micron or 50 micron versus approximately 9 micron for singlemode optical fibres. The ability to transmit data over distance is commonly referred to as the bandwidth distance product. Because of the larger core size in a multimode optical fibre, the bandwidth distance product can present a limitation for very large underground networks. Additionally, multimode fibre has significantly higher intrinsic light attenuation, or the loss of the optical power, which is another limiting factor in large underground networks.

For example, bending cables in a radius that is smaller than the specified value can result in macro bending attenuation. In this instance, light is allowed to escape through the cladding region of the optical fibre due to a change in the angle of incidence of the light ray travelling through the fibre. Additional sources of attenuation include micro bending of the optical fibre. This occurs when a lateral force is applied to an optical fibre such that the waveguide is deformed microscopically. The effect on the transmission path of light travelling within the glass is similar to that of a macro bend whereby the deformation causes a change in the geometry of the fibre structure allowing light to escape through the cladding.

In recent years, optical fibres have improved significantly, exhibiting lower intrinsic attenuation, higher bandwidth distance product and greater performance in bending. However, it is important for the network operator to understand the basic tenets of these issues in order to get the most out of the underground network. Since underground mines are growing daily and networks are extending further and further underground, maintaining head room in the optical power budget is important. To work properly in extreme environmental conditions found in underground mines, optical fibres should be packaged in robust cables that are capable of preserving these critical transmission properties.

Effective optical cable designs incorporate features proven to protect and preserve the optical budget for extended durations in extreme conditions. Factors affecting the cable such as tensile loading, bending, crushing, impact forces, moisture, chemical exposure, vibration and hot or cold temperature extremes need to be considered. Multiple test methods have been developed by a variety of industry standards groups to help determine appropriate performance specifications for cables. Many of these industry groups have focused on specific applications or installation environments such as typical telecommunications closets or structured cabling within commercial buildings. While these groups have developed standards that are excellent for qualifying cables for these applications, it is important to recognise that optical cables going into harsh environments, such as underground mines, may need additional performance attributes. Some in the industry have looked to military specifications as the ultimate in ruggedness. While these are certainly high-performing cables, in many instances a combination of specifications is more relevant. For example, as robust as military cables may seem, one important criterion that is commonly omitted from these cables is that of optical fibre strain.

In this article we’ve investigated the issues around transmission properties of optical fibre and discussed how cable systems can protect and preserve the optical budget used in underground networks. However, we have yet to touch on a key parameter affecting long-term reliability of optical fibre cable systems. Since optical fibre is made of glass, optical fibre strain must be considered in order to avoid premature failure due to static or dynamic fatigue. Strain is the word used to describe the deformation that occurs when an object is stressed. In this case, the optical cable may be stressed during both installation and operating conditions. Examples of cable stress include pulling under tension during installation, bending, self-supporting cable installations, wind load, ice build-up and even thermal stress caused by extreme temperatures. In these situations, the cable design must isolate the optical fibre such that the fibre strain is limited to specific values. In most cases, the recommended fibre strain threshold is less than 0.2% for residual loading of 100 kpsi proof tested fibre. Multiple studies have been conducted dating back to the 1990s demonstrating that long-term reliability of optical fibre can be achieved with this performance attribute designed into the system. Typical AFL cables deployed in harsh environments are depicted in Figure 2. 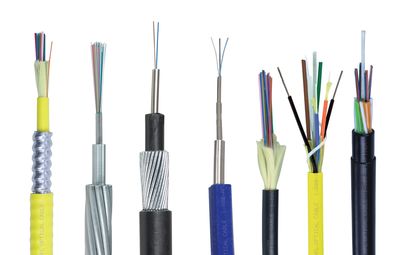 Above and beyond all considerations in underground confined spaces where explosive gases may be present is that of human safety. Cable systems should meet the local safety requirements for flame spread, smoke generation and toxicity. In the United States, Mine Safety and Health Administration, or MSHA, approved cables have been validated by a third party to comply with these requirements. In many international locations, the International Electrotechnical Commission, or IEC, has established similar requirements.

Pre-terminated cable assemblies that have gas-blocked connectors are commonly used in underground mines due to the concern of explosive gas migration. In addition to safety, pre-terminated cable assemblies offer the added advantage of a plug-and-play modular network approach. Since mines are growing by the minute, plug-and-play modularity allows the network operator to easily and safely extend the cabling system to allow growth with the operation.

AFC Group, an AFL company based in Australia, worked with a Queensland-based coal company to tailor its industrial plug-and-play solution to meet the requirements of one of the harshest working environments in the world.

As part of its longwall mining operation, the mine runs communications systems to the coal face for control, monitoring and safety systems. Generally using Ethernet-based protocols, the system had previously used composite cabling, which contained both the high-voltage and fibre-optic cable. The use of physical contact ST connectors in the underground coal environment led to issues with contamination, ultimately causing a high failure rate.

AFL’s 12-fibre cabling solution was developed for the mine site based on tactical tight buffered cable, which is particularly suitable for installations where extreme environmental conditions are present. The cable was factory terminated with expanded beam connectors, designed to eliminate physical contact, vastly reduce the cleaning requirements and enhance the system reliability. The cabling system connects from the pump station to the distribution control board and is installed on the monorail with existing services. The flexibility of the tactical tight buffered cable means that the cabling system can be safely moved, recovered and redeployed during longwall retractions and longwall moves. The cables are simply uncoupled using the expanded beam connectors and reconnected in their new locations.

Overall, the fibre-optic cabling system provides the mine with a reliable and rugged system, well suited to the harsh environment of underground coalmining. Many other mine operations around the world are taking advantage of the benefits of fibre-optic systems including plug-and-play modularity, high reliability, exceptional bandwidth and intrinsic safety.

Closing the gap on digital inequality