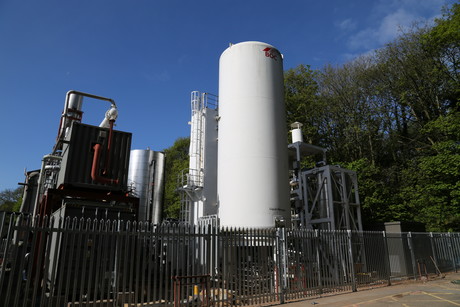 Balancing power supply and demand could be about to become easier for electricity providers, following new research by University of Birmingham academics.

Led by energy experts at the institution, MANIFEST (Multi-Scale Analysis for Facilities for Energy Storage) is a £5 million project that taps into Birmingham’s long-standing expertise in cryogenic and thermal energy storage.

The project, led by Dr Jonathan Radcliffe, brings together Birmingham’s expertise in liquid air and thermal energy storage with scientists from across the country working on thermomechanical and electrochemical storage technologies and their integration and optimisation.

Air’s main component gases liquefy at ~-196°C and the result occupies a 700th of the volume of those gases at room temperature. When liquid air is warmed and allowed to expand, its forceful expansion can spin turbines — operating generators and recovering part of the electricity used for liquefication.

Professor Yulong Ding from the University of Birmingham — one of the originators of liquid air energy storage — is working on multiscale modelling of energy storage systems in MANIFEST.

“Modelling energy storage systems is extremely complex and challenging, the MANIFEST program provided cross-university and cross-discipline collaborations for addressing the challenge. Equally important and also of our particular interest is experimental validation of multiscale modelling through this research program,” Ding said.

“Technologies such as liquid air and thermal energy storage have a great potential to help crack the energy conundrum: how can variable generation from renewables meet the needs of energy users. We have one of the world’s first experimental cryogenic energy storage facilities on campus and also achieved success with the first commercially available shipping container constructed from cold storage materials that can be charged with cold energy.”

Additionally, the University of Birmingham is working on establishing UKESTO (UK Energy Storage Observatory) as part of the MANIFEST project — creating a national ‘observatory’ for energy storage that will give scientists online access to data from experimental facilities at the partner universities within the consortium.

“MANIFEST is allowing the detailed study of a range of energy storage technologies and their potential impact across the energy system. There is a focus on batteries now, but that is just part of what will be required to integrate renewables at the scale needed to be on track for net-zero. And whilst there is a growing number of energy storage demonstrator sites in the UK and globally, there is little data available on their operations,” said MANIFEST and UKESTO lead Jonathan Radcliffe.

“UKESTO will connect energy storage pilot plants on university campuses to create a network of national facilities that establish the UK as an innovation hub — allowing systematic study of energy storage technologies to an extent that is not possible with industrial demonstrators.”

Professor Ding and Professor Toby Peters, Professor of Cold Economy at the University of Birmingham, are widely recognised as the ‘founding fathers’ of liquid air energy storage, having identified both the need for large-scale energy, long duration storage back in 2004 and the potential to integrate mature components from existing industries in a new system able to scale to hundreds of MWs.

Ding led the team which invented and proved the idea of cold recycle, key to achieving high levels of efficiency, while Professor Peters mainstreamed the concept of liquid air as an energy storage solution vector for both electricity grids and clean cold and power.

“We’re hugely excited at the opportunity to build on the vast experience in cryogenic energy storage at the University of Birmingham and help to unlock the potential of liquid air and other energy storage technologies,” Peters said.

“Liquid air energy storage is a unique solution to provide low-cost, large-scale, long-duration energy storage with no geographical constraints. It also can harness waste heat or waste cold in the system to further increase the overall efficiency.

“With the demand now for large-scale, long-duration energy storage, liquid air can emerge as the serious competitor to lithium-ion in grid-scale storage.”

What responsibilities do employers have during COVID-19?

Here are the steps employers need to take — and the rights workers have — in the face...