Why smart cities of the future need secure infrastructure 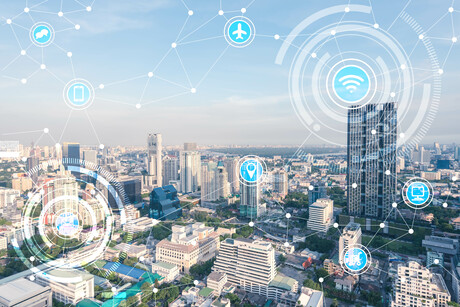 Smart cities have long been anticipated as a utopian vision of urban living. These hyper-connected hubs leverage IT, the Internet of Things (IoT), the Industrial Internet of Things (IIoT), and operational technology to create a smart environment that improves the quality of life for its citizens and visitors.

A smart city is a hive of ubiquitous, ongoing digital communication. The dynamic interaction of public and private organisations, people, devices and assets drives the smart technologies that in turn control water management, waste management, streetlights, air quality monitoring, on-demand public transport and other sensors that manage the social, physical, institutional and economic infrastructure of the city.

However, this massive amount of data exchange, integration between disparate devices and dynamically changing processes creates an unprecedented cyberthreat. If it’s connected, it needs to be protected. As connected device numbers escalate to around 30.9 billion by 2025, this creates a growing digital attack surface.1

Each of these devices has its own vulnerabilities. And each device can pass those insecurities right through every layer of the city’s smart infrastructure. A problem in one service area can quickly cascade, potentially leading to catastrophic failures and the disruption of law enforcement, residential services, hospitals and schools.

Without effective cybersecurity, smart cities cannot defend themselves against data breaches, hacking attacks and malicious actors. Many municipalities may be enthusiastically deploying smart city technology; however, there is often little strategy around its protection from cyberthreats.

Weaknesses can permeate all levels of the smart city infrastructure. Newer technologies may generate data in different formats. Older systems may have different, or weaker, security protocols and use different communications tools. If sensors, routers, switches, firewalls, endpoints or cloud services start to fail, hackers and attackers can pounce.

The lack of accepted standards governing IoT devices further exacerbates the problem. When cities experiment with new vendors or products, there’s no guarantee that their technologies can talk to any of the existing infrastructure. The focus may be on the service they deliver rather than how they fit into the cybersecurity framework, potentially causing catastrophic data leaks.

Further to the issue of industry standards, bespoke, custom-built deployments also present a significant challenge. Older smart cities were unique builds or ad hoc, unconnected pilot initiatives. As technology has evolved, so have these initiatives, demanding an ongoing expansion plan, which is a potential minefield of backwards-compatible solutions that compromise interoperability and security.

Include the ever-changing requirements of individuals, economic drivers, pandemic implications, military threats and politics in the mix and it becomes clear that smart cities need to be agile, constantly responding to the world around them. However, they also need to focus on a secure core to protect their growing communities.

With the right security technology and cybersecurity guidance, protecting smart cities is achievable. A holistic approach to cybersecurity, the convergence of physical and digital infrastructure, and the interconnectedness of systems and data is the goal of any smart city.

An integrated cyber risk framework should form the core of any smart city development. The goals of confidentiality, integrity, availability, safety and resiliency should be the foundation of any smart city planning.2 It should inform how cyber risk may impact the entire city ecosystem across the regulatory, social, physical, institutional and economic infrastructure.

A robust and resilient cybersecurity core will let smart cities resist and predict cyber attacks. Instead of scrambling to shut down attacks, intelligent data collection and analysis across the entire infrastructure (both physical and digital) enables smart cities to leverage a more future-facing management system and then develop forensic capabilities to help trace a threat and contain it, preventing it from spreading beyond its host city.

As well as the technology itself, there is the vital element of human maintenance and management required to keep the infrastructure viable and effective. The cybersphere is constantly evolving. Threats are expanding at an even faster rate. An agile team that’s efficiently administrating the infrastructure can proactively protect the city and its community.

Municipalities are deploying smart city technology and seeking ways to take advantage of the inherent benefits smart cities bring to their communities. However, deploying these technologies with little cybersecurity strategy may create fragmented and insecure systems.

With the right security technology and cybersecurity guidance, protecting residents from cyberthreats and attacks is genuinely possible. Smart cities can also be secure cities.

What technologies are available for facility managers to ensure that buildings can be monitored...