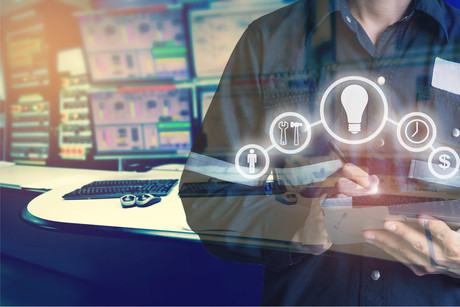 With energy conservation becoming increasingly important to organisations around the world, the demand for smart buildings has risen.

In fact, according to a report from Mordor Intelligence, the smart building market is expected to experience growth of more than 23% during the period 2020–2025.

As sensor technology, control techniques and IoT infrastructure have improved over time, smart buildings have become more efficient — including in terms of power consumption.

Industry 4.0 and the automated building

The building industry has begun to focus on ‘Industry 4.0’ — also known as the concept of using technologies to connect the physical world with the digital world — in relation to building automation. According to Macquarie University researchers in the article ‘Sensing, Controlling, and IoT Infrastructure’, Industry 4.0 in the building sector can both increase safety and reduce the energy consumption, without compromising the comfort level within the building.

Applying Industry 4.0 principles to HVACR (heating, ventilation, air conditioning and refrigeration) systems is particularly useful, given that these systems typically account for as much as 30% of energy use and costs in commercial buildings and office spaces. Using smart HVACR technology, such as smart thermites, sensors, control valves, smart actuators, air-conditioning systems and smart room heaters, creates ‘greener’ buildings that have the capacity to conserve more power. Consequently, around the world, increased government regulation has seen a requirement for many new buildings to be fitted out with smarter heating and cooling systems, which in turn reduces the amount of power that these systems are using.

In the article ‘Sensing, Controlling, and IoT Infrastructure’, the researchers suggest that an IoT-based building management system (BMS) is the next step for improving energy efficiency in commercial buildings. They state that the BMS can help to manage, monitor and control energy consumption within the building, and “it is also capable of gathering information from building to control the HVAC, artificial lighting, natural daylighting operation, and utilities in connection with safety devices, fire detection, and protection”.

According to the ‘Smart Homes Market — Growth, Trends, and Forecast (2020 - 2025)’ report, recent IoT advancements that have led to a drop in price for sensors and processors may also encourage manufacturers to promote automation in the household sector and deliver greater energy savings.

A team of researchers at Penne State has been working on technology that can power sensor networks for smart buildings and factories. The everyday electricity used in homes and buildings around the world also creates small magnetic fields while it is in operation — scientists are now trying to harvest this ‘waste’ electricity for use in sensor networks.

“Just like sunlight is a free source of energy we try to harvest, so are magnetic fields,” said Shashank Priya, professor of materials science and engineering and associate vice president for research at Penn State.

“We have this ubiquitous energy present in our homes, office spaces, work spaces and cars. It’s everywhere, and we have an opportunity to harvest this background noise and convert it to useable electricity.”

The team of scientists developed a device that provides 400% higher power output compared to other state-of-the-art technology when working with low-level magnetic fields, like those found in homes and buildings.

Paper-thin devices of about 1.5 inches long were placed on or near appliances, lights or power cords where the magnetic fields are strongest. According to the researchers, these fields quickly dissipate away from the source of flowing electric current. When placed four inches from a space heater, the device produced enough electricity to power 180 LED arrays. When placed inches away, enough electricity was produced to power a digital alarm clock.

This technology has implications for the design of smart buildings, which require self-powered wireless sensor networks to carry out functions such as the monitoring of energy and operational patterns, as well as remotely controlling systems.

“In buildings, it’s known that if you automate a lot of functions, you could actually improve the energy efficiency very significantly,” Priya said.

“Buildings are one of the largest consumers of electricity in the United States. So even a few percent drop in energy consumption could represent or translate into megawatts of savings. Sensors are what will make it possible to automate these controls, and this technology is a realistic way to power those sensors.”

When carrying out their research, the scientists used a composite structure where they layered two different materials together. One of these materials is magnetostrictive, which converts a magnetic field into stress, and the other is piezoelectric, which converts stress, or vibrations, into an electric field. The combination allows the device to turn a magnetic field into an electric current.

The device has a beam-like structure with one end clamped and the other free to vibrate in response to an applied magnetic field. A magnet mounted at the free end of the beam amplifies the movement and contributes toward a higher production of electricity.

“The beauty of this research is it uses known materials, but designs the architecture for basically maximizing the conversion of the magnetic field into electricity,” Priya said. “This allows for achieving high power density under low amplitude magnetic fields.”

The research was published in the journal Energy and Environmental Science.

Automation in the future

With energy costs continuing to rise, building managers will face increasing pressure to find ways to save on power within their facilities. This in turn will see a rise in the implementation of IoT communications to foster smart building automation.

In the article ‘Sensing, Controlling, and IoT Infrastructure’, the researchers suggest that LoRa — a long range, low-power wide-area network protocol — has advantages over other communication protocols. They said that “this protocol has been mostly preferred because of its key features such as low power consumption, bidirectional communication, secure, standardised, high capacity, low cost, and long range”. Not only that, but LoRa is deployed with a target — meaning that end-devices have an energy usage limitation placed on them. They have the capacity to connect energy systems with smart devices and sensors, and enable the easy implementation of a more economical, power-saving building management system.

Why smart cities of the future need secure infrastructure

While smart cities have long been anticipated as a utopian vision of urban living, their sheer...