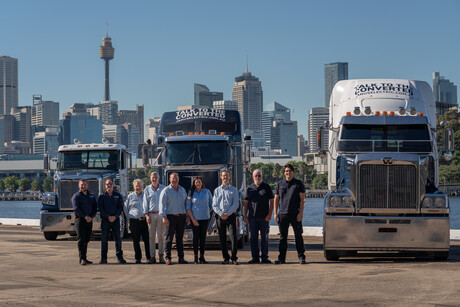 In what has been described as an Australian first, a new electric fleet of Class 8 Prime Movers was unveiled at the Janus Electric Showcase in White Bay, Sydney, on Tuesday, 5 April.

Rather than building electric trucks from scratch, Australian technology company Janus Electric has developed a solution that involves converting existing heavy vehicles so that they can be powered by the company’s exchangeable batteries, which can charge ‘anywhere, anytime’ using renewable energy. “Our electric fleet is a mix of some of Australia’s popular prime movers, including Kenworth, Freightliner, Mack, Volvo and Western Star vehicles, proving conversion is simple and easy to do across all makes and models,” said Janus Electric General Manger Lex Forsyth.

Pointing out that all heavy vehicles require major engine rebuild at 1,000,000 km, Forsyth said this presented an ideal opportunity to convert to electric using the Janus Conversion Module (JCM).

“Electrifying our road network is no longer a pipedream for future Australia, but a real, tangible solution for today that we can act on now.”

After undertaking operational trials since 2020, Janus Electric will also be expanding the use of its technology into more rugged terrain. “We have just announced a new partnership with Qube and OzMinerals that will see our technology put to the ultimate test, powering the world’s largest electric truck to haul heavy mining loads through the harsh terrains of the Australian outback,” Forsyth said.

“The 12-month trial will see our technology put through its paces under some of the harshest conditions in the world.”

Installers of renewable energy systems are being urged to help identify and warn consumers about...

A multimillion-dollar promotional blitz is underway to encourage more interstate tradies to help...

A WA electrician has been fined $5K for not adequately supervising electrical work carried out by...