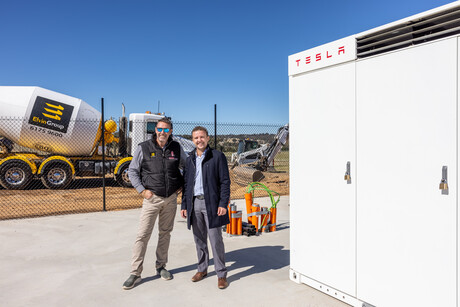 The battery will form an essential part of electricity infrastructure that will supply north Canberra suburbs of Holt and Ginninderry and represents the first installation in Australia to supplement an urban power supply on a large scale.

“The project has been developed in line with the ACT network distributor, Evoenergy, who are committed to supporting the connection of renewable solutions that enable continued reliable and high-quality power supply to the Canberra community,” he said.

“Evoenergy is committed to working with the energy industry and the community to promote the uptake of renewable energy and facilitate ACT’s progression towards a net zero carbon future. We are excited to be a part of innovative projects like these and we’re dedicated to transforming our grid to be at the forefront of our energy network transition and technology change,” he said.

The 5 MWh battery will have the capacity to service the average energy needs of approximately 5400 households for an hour, and will also stand ready to pump power into the grid in the event of a shortfall, making sharing between ACT and NSW more efficient.

“We are excited by this project, not only is it a major ‘in-front-of-meter’ installation in Australia but it is the first stage of a nationwide move to renewable energy and a wholesale reduction in our carbon emissions,” Blackadder said.

“The aim of this installation is to show that community how renewable resources are a viable solution to meet Canberra’s needs for stable, reliable, consistent and environmentally positive energy.”

As the project expands, batteries can be placed at strategic sites around the grid, to inject bursts of power to fill gaps in dispatchable supply through a virtual power plant (VPP), meaning that the nation’s existing power supply can be used more efficiently to serve greater demand.

“The growth of Canberra’s population and more frequent extreme weather events have increased the demands on reliable power supply throughout the ACT. Over the past two years, the impact of storm events, hot summers and the devastating bushfires placed increased risk on the territory’s power supply. Networks are looking for non-network options that help avoid extended brownouts/blackouts and fluctuating voltage.

“We have been developing this project for a large-scale battery installation to support electrical grid infrastructure in potentially constrained parts of Canberra’s network via frequency control and ancillary services (FCAS),” Blackadder said.

Elvin Group CEO Craig Elvin said the company has always focused on the long-term needs of Canberra and believes in proactively advancing energy projects that benefit the region. The company is currently involved in projects developing some of Australia’s first hydrogen hubs along the east coast of NSW and Queensland. These will feature Australian-developed electrolysers, with plans to manufacture them in the ACT. The company is an active National Energy Resources Australia (ACT Cluster) member, focusing on the adoption of hydrogen.

“As part of the Holt project we will also be installing a 500 kW ground-based solar array which will help ensure the operating ability of the battery during early afternoon evening peak loads,” Elvin said.

Project completion is expected May 2021.

FIMER has released its PVS-10/33-TL three-phase string inverter solutions for commercial and...