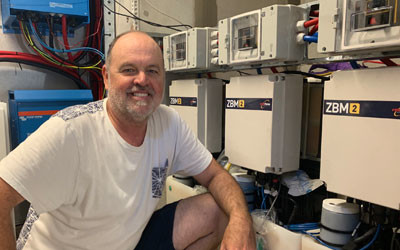 Western Australians who applied for home solar systems a decade ago will soon see an end to feed-in tariffs paid by the state government as the 10-year renewable buyback scheme comes to an end. Residents who took up the solar incentive between 1 July 2010 and 30 June 2011 locked in feed-in tariffs of 40c/kWh for 10 years, while those who applied in July 2011 have been receiving 20c/kWh for the 10-year period.

“The Redflow battery is ideal for WA conditions, handling the dry heat and the great distances in remote regions,” Elsegood said.

“We have installed a lot of batteries over the years, especially in remote areas, but the problem with lead-acid batteries is the heat and their size. For 40 kWh of battery storage in lead, you need a cargo-size container. The newer lithium batteries create complexity, especially for a large system, and they lose their storage capacity over time, which makes them difficult to plan with.

“With Redflow’s zinc-bromine flow batteries, you get a lot of kilowatts for the battery. They keep their storage over time. They handle the heat. They can work hard, charging and discharging consistently at 3 kW and up to 5 kW, so it is straightforward to design a large storage system.”

Elsegood said that he’s had his eye on the zinc-bromine battery technology for some time. “Now I think the time is right for them. Everyone is starting to recognise that we were over-sold on the benefits of standalone solar as the great feed-in tariffs disappear over the next couple of years.

“At that point, people will see that their home solar is producing a lot of power but they’re not getting paid much for it. Using Redflow batteries, we can design a system that has a lot more benefit for the home owner during the evenings. We are getting a lot of interest in this at the moment.”

“TIEC is a successful business with a strong focus on sustainability, so Leith brings both passion and the proven expertise and capability to match it.”

SOLARWATT's Vision glass-glass modules are durable and robust against environmental...

SolarEdge has introduced an extended feature set on its Designer tool that specifically supports...

How to select and use COTS components for space applications

Victoria "on notice" ahead of new workplace manslaughter laws

Painter killed by fall from roof

Bats inspire detectors of corrosion in oil and gas pipelines

Future of Mining Conference in Sydney