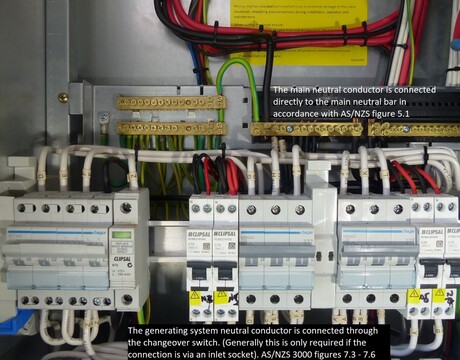 It said it had recently identified several installations where the incoming main neutral conductor had been switched via an alternate supply changeover switch. These included battery energy storage systems and standby generator installations.

This resulted in energised earthing systems which could cause an electric shock.

The incoming main neutral is a protective earth neutral (PEN) conductor. When a fault occurs in the electrical installation and the PEN conductor is open circuit, the installation earthing system will become energised as the current return path is via the earthing system through the ground.

As current increases, the voltage on the earthing system will increase due to the impedance of the ground.

In the event of a short circuit to earth, voltage on the earthing system will rise to full supply voltage and it’s unlikely that a sufficient current will pass to operate upstream protection.

WorkSafe Queensland said that circuit protective devices and RCDs will not provide protection against the voltage rise on the earthing system.

Before starting work on an electrical installation, WorkSafe Queensland is reminding electricians to check for alternative supplies and the integrity of the PEN conductor as part of their risk assessment.

A worker died and six others received electric shocks during an incident with a harvester in July...

A combined penalty of $25,000 has been issued to a director and two NSW-based companies over a...

Building and fire safety authorities in WA are reminding home owners that all smoke alarms should...