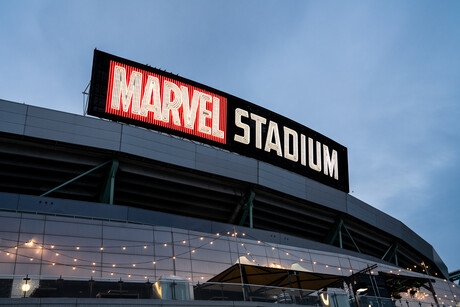 In a demonstration of the power and potential applications of hydrogen technology, Toyota has used a stationary fuel cell to power Melbourne’s iconic Marvel Stadium sign and coaches’ box for the Round 19 AFL clash between the Western Bulldogs and Melbourne Demons on 23 July.

The demonstration used the same type of Toyota-designed fuel cell as seen in the Mirai FCEV (fuel cell electric vehicle). Toyota Australia Manager of Energy Solutions Matt Macleod said the demonstration aimed to showcase the broader applications of hydrogen-powered fuel-cell technology beyond the transport sector, as a clean and efficient source of energy generation across a range of industries.

“Partnering with the AFL to help power the Round 19 game at Marvel Stadium shows the incredible scope this technology has, all while producing no CO2 emissions.”

The EODev GEH2 fuel cell unit is capable of producing roughly 80 kW of power, but only 10–15% of this capacity was required to power the Marvel Stadium facilities, providing 105 kWh of electricity over the course of seven hours. Running in the lead-up to and during the game, the EODev unit used 6 kg of hydrogen, saving an estimated 100 kg of CO2 emissions compared to running the lighting off the electricity grid, demonstrating immediate environmental benefits.

To further raise awareness of its fuel-cell technology, Toyota had a cross-section of the Mirai and its FCEV powertrain on display at the Marvel Stadium concourse, allowing passers-by to view the technology up close. 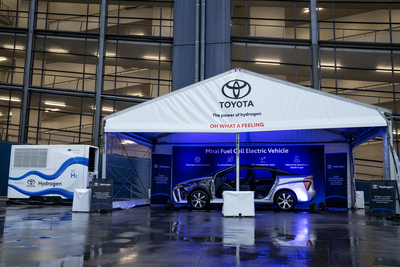 The Mirai powertrain is composed of a 330-cell fuel cell stack, three compressed hydrogen tanks, a lithium-ion battery and integrated electric motor, combining to produce 134 kW/300 Nm. The three carbon-fibre reinforced plastic (CFRP) tanks are capable of storing up to 5.6 kg of hydrogen, which allows for a driving range of approximately 650 km with only water vapour as emissions.

Toyota’s stated commitment to hydrogen-powered technology is part of its strategy for achieving a more sustainable future under the Toyota Environmental Challenge 2050, which aims to achieve zero CO2 emissions from the corporation’s vehicles and plants globally by 2050.

Call for Vic to decarbonise gas

The Victorian Government is being urged to provide support for efforts to decarbonise gas.