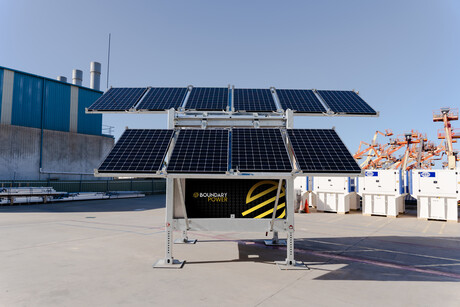 With a history of standalone power system design and deployment in Western Australia, Boundary Power’s first sale on Australia’s east coast will be deployed and handed over to a NSW utility provider in May 2022.

Rod Henderson, Boundary Power Director, was enthusiastic about the adoption of the technology by the east coast market. “To have Boundary Power’s very first Solar Qube deployment going into New South Wales, a market seeing significant growth, is incredibly exciting for the team who built the product here,” he said.

“Solar Qube is our award-winning solution. To see it deliver on its potential as a real-world energy supply solution is both exciting and rewarding.”

Boundary Power has reported success in its first year in Western Australia with its Nano, R-Series and Kiosk designs, providing custom solutions for utility and communications customers.

The company says its Solar Qube will enable an energy solution that provides the end user with the confidence of continuous power from a renewable source that is safe and resistant to the elements. A rapidly deployable and modular solution, the Solar Qube is particularly suited to remote locations. It offers the potential for customisation and can be scaled to suit the user’s need with the capacity to supply power for medium-to-large loads.

Henderson noted the rapid growth of the SAPS market in NSW: “The standalone power system market along Australia’s east coast is advancing rapidly, with SAPS technology now being embraced by emergency services, communications providers and the mining industry,” he said.

“This order is evidence of the market’s desire for a customisable and reliable off-grid renewable energy solution.”