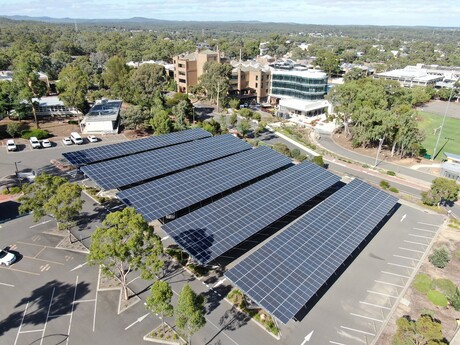 La Trobe University is well on its way to achieving net zero carbon emissions by 2029, with one-third of electricity used at the Bendigo campus now generated by onsite renewables, including new carports that feature 1500 solar panels.

Now not only do students and staff now have a shady place to park their cars, but the investment will significantly reduce the campus’s running costs and carbon emissions. The new carports have added 1500 solar panels to the campus — bringing the total, including hundreds installed on rooftops, to more than 3300.

“Not only do students and staff now have a shady place to park their cars during hot days, but with this investment we have significantly reduced the campus’s running costs and carbon emissions,” Professor Dewar said.

“It’s exciting to see these carports and other initiatives come to fruition after years of planning, as we draw closer to achieving our goal of net zero carbon emissions on our regional campuses by 2022, and across the university by 2029.”

The carports are part of a suite of measures the university has implemented in Bendigo to reach the 2022 goal — including installing thousands of high-efficiency LED lights and a large-scale organic waste composter.

The President of the Bendigo Sustainability Group, Colin Lambie, said La Trobe University is a model for other organisations who are serious about reducing their carbon footprint.

“Here we see an organisation that has set itself an ambitious target, and is investing [in] a range of energy-efficient, sustainable measures to achieve a good outcome for itself and for the community,” Lambie said.

“Reducing carbon emissions and impact on the environment should be a significant focus for all organisations.”

The solar panels at La Trobe’s Bendigo campus equate to 1.15 MW, or the equivalent of 230 household systems.

More information on the Net Zero program can be found at the university’s website. A time lapse video of the construction can be found here.