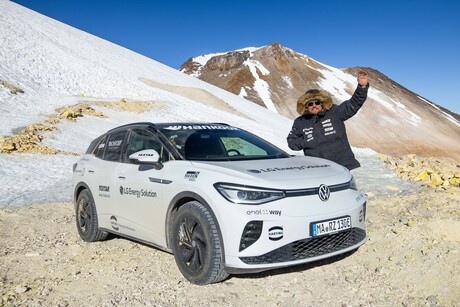 In 2021, professional driver Rainer Zietlow drove more than 57,500 km through the USA, completing the longest ever journey by an electric vehicle in a single country and more than doubling the previous world record. This year, he set out to attempt another record: the highest altitude achieved in an electric car.

With a Volkswagen ID.4 GTX, Zietlow travelled to Bolivia to climb the world’s highest, still-passable mine road, at the Uturuncu volcano, using only electric power. The mine road had undergone repairs after the worst of the COVID-19 pandemic, and Zietlow was the first to be allowed to use the restored road up to the old mining area.

“Our goal was to show that electromobility is also capable of high performance at extreme altitudes,” he said.

After four hours and 20 minutes of driving, Zietlow reached the end and highest point of the mine track: 5816 m above sea level, 45 m higher than the previous record. On the journey to base camp through Argentina and Bolivia, he was able to rely on charging infrastructure from Enel X Way, which had been installed at various hotels every 300 km along the route for the 2020 electric motorbike project ‘The Long Way Up’ by actor Ewan McGregor.

Once back in La Paz, Bolivia’s seat of government, Zietlow was presented with the Guinness World Record certificate by a Guinness representative at the German Embassy. The challenge was also actively supported by HARTING Technology Group, VW’s Tier 1 supplier of charging cables and the original equipment manufacturer of the onboard charging cables.

“Congratulations to Rainer Zietlow for this great success,” said Marco Grinblats, Managing Director at HARTING Automotive. “We are delighted for him and his team on this further Guinness World Record. This has once again sent an important signal and raised awareness of the fight against climate change.”

The policy will deny customers choice of energy supply, may cost them more in power bills and...

To meet a growing demand for battery electric heavy-duty vehicles and machines, the Volvo Group...

Biden signs US CHIPS and Science Act into law

Closing the gap on digital inequality