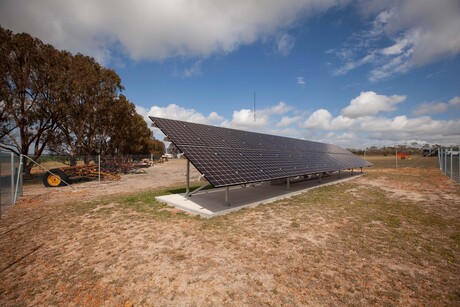 WA Energy Minister Bill Johnston has announced a $37 million rollout of more than 180 standalone power systems (SPS or SAPS) commencing in 2023, with the aim of revolutionising power supply in regional Western Australia and providing significant economic stimulus for WA-based business.

The deployment marks Australia’s largest single rollout of SAPS and will replace around 762 km of overhead powerlines, improve land amenity for farmers and reduce the risk of bushfires.

Boundary Power, a joint venture between Western Australian utility Horizon Power and Australian engineering industry leader Ampcontrol, has been selected along with Hybrid Systems Australia as a delivery partner for the construction and delivery of 101 renewable R-Series SPS in areas around Narrogin, Merredin, Three Springs and Southern Cross.

The local Kewdale-based team will commence site visits, structural assembly and testing over the next six months with onsite installation to begin in early 2023. Drawing on the expertise and proven production strategies of both joint venture partners, Boundary Power is set to grow significantly to deliver the project, creating around 30 new jobs.

Rod Henderson, Boundary Power Director, said it was an exciting win to be part of the largest SPS deployment in Australia. “This project demonstrates our strength to work with clients such as Western Power, to provide optimal solutions for their needs,” he said.

“Boundary Power is proud to play an integral role in Western Power’s SPS program, which supports remote communities by providing a more reliable and cost-effective option through advancing renewable technology rather than traditional poles and wires.

“Our team has the expertise to design and engineer from our suite of products. It’s their ability to adapt and re-engineer our designs that set our products apart.”

Boundary Power stated that with Western Power rolling out SPS on a scale never seen before in Australia, and the state government committed to deploying 1000 SPS over the next four years, the project was an important step in its timeline and for the SPS industry overall.