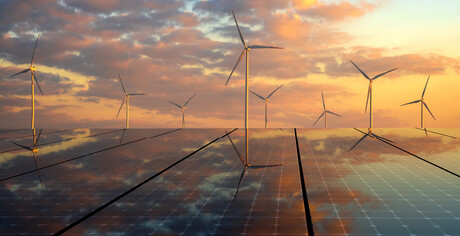 The question of renewable power reliability is explored in a recent study by the University of California, Irvine.

With the eyes of the world on the United Nations COP26 climate summit in Glasgow, strategies for decarbonising energy infrastructure are a trending topic. Yet critics of renewables question the dependability of systems that rely on intermittent resources.

In a paper published recently in Nature Communications, the authors, including experts from China’s Tsinghua University, the Carnegie Institution for Science and Caltech, said that most of the current electricity demand in advanced, industrialised nations can be met by some combination of wind and solar power. But that positive finding comes with the caveat that extra efforts are going to be necessary to completely satisfy the countries’ requirements.

Most reliable systems, which are dominated by wind power, are capable of meeting electricity requirements in the countries studied 72–91% of the time, even without energy storage, according to the study. With the addition of 12 hours of energy storage capacity, systems become dominated by solar power and can satisfy demand 83–94% of the time.

“Wind and solar could meet more than 80% of demand in many places without crazy amounts of storage or excess generating capacity, which is the critical point,” said co-author Steve Davis, UCI Professor of Earth System Science.

“But depending on the country, there may be many multiday periods throughout the year when some demand will need to be met by energy storage and other non-fossil energy sources in a zero-carbon future.”

The team analysed 39 years’ worth of hourly energy demand data from 42 major countries to evaluate the adequacy of wind and solar power resources to serve their needs. They found that a full conversion to sustainable power resources can be easier for larger, lower-latitude countries, which can rely on solar power availability throughout the year.

The researchers highlighted Germany as an example of a relatively smaller country, in terms of land mass, at higher latitude which will make it more challenging to meet its electricity needs with wind and solar resources.

“Historic data show that countries that are farther from the equator can occasionally experience periods called ‘dark doldrums’ during which there is very limited solar and wind power availability,” said lead author Dan Tong, Assistant Professor of Earth System Science at Tsinghua University.

“One recent occurrence of this phenomenon in Germany lasted for two weeks, forcing Germans to resort to dispatchable generation, which in many cases is provided by fossil fuel-burning plants.”

Among the approaches the researchers suggested to alleviate this problem are building up generating capacity that exceeds annual demand, developing long-term storage capabilities and pooling resources of multiple nations on a continental land mass.

“Europe provides a good example. A lot of consistency and reliability could be provided by a system that includes solar resources from Spain, Italy and Greece with bountiful wind available in the Netherlands, Denmark and the Baltic region,” said Tong.

The researchers found that a wind and solar power system could provide about 85% of the total electricity demand of the United States, and that amount could also be increased through capacity overbuilding, addition of batteries and other storage methods, and connecting with other national partners on the North American continent.

“Around the world, there are some definite geophysical constraints on our ability to produce net-zero carbon electricity,” said Davis.

“It comes down to the difference between the difficult and the impossible. It will be hard to completely eliminate fossil fuels from our power generation mix, but we can achieve that goal when technologies, economics and sociopolitical will are aligned.”