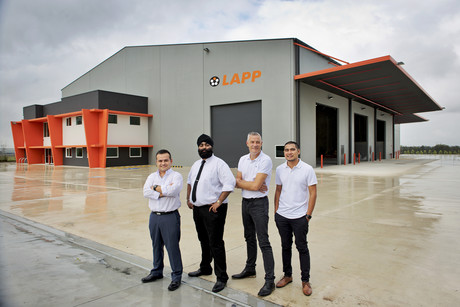 Lapp Group, a supplier of cable and connector systems, and integrated electrical and automation engineering solutions, has established a subsidiary in Australia to meet growing demand.

The company is offering a one-stop shop for integrated, efficient and reliable systems that conform to Australian, European and American compliance and quality standards, said Pullinger. In addition to major Lapp brands of product — such as OLFLEX, UNITRONIC, HITRONIC, SKINTOP, SILVIN, EPIC, FLEXIMARK and ETHERLINE — Lapp Australia will focus strongly on total solutions incorporating compatible components from the one source.

“This integrated approach will save customers time and money when assembling optimum solutions to their particular needs, while ensuring proven reliability in service,” said Pullinger.

“The family-owned Lapp organisation is renowned globally for its levels of quality, innovation and for its commitment to ethical values and service, qualities which it will bring to key Australian markets,” said Pullinger. These include: manufacturing and plant engineering, including automation and robotics and process engineering systems; electrical engineering systems and energy systems, including wind and solar green energy; machine building and machine tools; food and beverage; automotive, rail and mobility systems; intelligent buildings and infrastructure; resources industry, including mining and oil and gas process engineering.

ECS Investments is a 50% shareholder in the new Lapp Australia business, with the remaining 50% owned by Lapp Holding Asia. The existing online Lapp Express website, meanwhile, will continue to expand in both countries, complementing the new strengths delivered by Lapp Australia.

Pullinger said Lapp’s investment in a new full subsidiary in Australia is a strong vote of confidence in local industry as it increasingly moves into the global industrial automation market, which is expected to grow to AU$460 bn by 2024 (according to Transparency Market Research, Sep 2017).

“Lapp has delivered its resources, expertise and German top-quality standards to Australia at a time in the country’s industrial development when such support is most needed to prepare diverse industries for a future in which they will use technology to compete cost-efficiently.

Standards Australia published Amendment 2 to the Wiring Rules on 30 April 2021. It comes into...