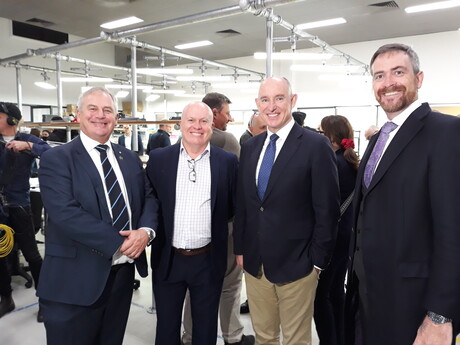 The Australian Trailblazer for Recycling and Clean Energy (ATRaCE) is the third project to receive funding through the Trailblazer program, designed to focus Australia’s research power on national manufacturing priorities and a shift to a low-carbon economy. The project aims to play a leading role in securing Australia’s economic recovery, with the investment expected to create 1600 jobs over the next four years.

The University of Newcastle and UNSW will work with 27 industry partners including Ampcontrol to develop world-leading technology in solar, hydrogen, storage and green metals, and to rapidly deploy new technology solutions.

Rod Henderson, Ampcontrol Managing Director & CEO, said, “The key areas we’ll be looking to explore include the further adoption of renewable energy solutions within industrial, agricultural and mining applications, as well as supporting the adoption and integration of electric vehicles into their site energy management. Ampcontrol is already innovating in this space with the creation of DRIFTEX, an electric vehicle for underground use to support decarbonisation in mining.”

Following a long-term partnership between Ampcontrol and the University of Newcastle in research and development of manufacturing and engineering solutions, Ampcontrol has given a financial commitment of $1 million over the course of the program.

“This program will transform the way technology readiness, commercialisation and industry-led research are prioritised, taught and rewarded in our universities with targeted opportunities for university staff and students to succeed,” he said.

“Working in partnership with major energy and recycling companies, end users and international entities, ATRaCE will transform the way research is commercialised. It will provide clear pathways for academics and industry partners to work together to supercharge their capabilities and deliver new technologies, faster to Australians.”

“UNSW and the University of Newcastle have a huge pipeline of innovative technologies that are aligned with growing global markets in electrification and energy systems, ‘power to X’ including hydrogen, next-generation solar PV systems, recycling and MICROfactories,” said Justine Jarvinen, CEO of UNSW’s Energy Institute.

“Our Trailblazer vision is to create a full innovation ecosystem that builds on our successful commercialisation history, accelerates impact and creates national capability.”

WA's energy safety regulator is urging consumers to use its online licence search to verify...

Next G Alliance and 6G-IA announce MoU on 6G