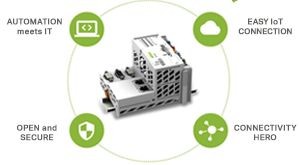 Bring new products to market faster and earn a quicker return on investment: WAGO offers you both with its new end-to-end software engineering. Thanks to the CODESYS-based runtime environment and real-time-capable Linux operating system, the PFC200 controller is the efficient control solution for your automation applications.

The second generation of WAGO’s PFC200 controller is significantly more powerful and has a larger memory. It enables both traditional PLC and open Linux programming in high-level languages. That’s why it’s the first choice for customers from both worlds, making programming open and easy.

Used as a PLC, the controller can be conveniently programmed with WAGO’s e!COCKPIT engineering software to significantly reduce development costs. The e!COCKPIT development environment supports many fieldbuses and protocols while also providing a comprehensive feature set. The PFC200 comes with an embedded Linux operating system, allowing the controller’s base image to be extended or exchanged via open-source packages and the PLC runtime environment to be completely replaced by C/C++ programs.

These features open up a wide range of possibilities for developers, granting them the flexibility to create custom solutions at any time. With the new system update, the PFC200 is Docker-ready and thus future-proof. Docker technology allows software containers to be installed without impacting the basic software. Another highlight is that the new controller can be connected to numerous cloud providers and MQTT brokers.

Additionally, the controller features a building-specific BACnet/IP protocol interface that connects the modular WAGO-I/O-SYSTEM to the BACnet network. Both the real-time capable Linux operating system and CODESYS V3-based e!COCKPIT engineering software are used to program the controller.

The controller shows its strengths in large system projects, where it can reliably and simultaneously automate a large number of BACnet objects. This high-performance controller complies with applicable industry standards, meets all market requirements and has successfully passed standard BACnet interoperability tests. It also meets both BACnet Building Controller (B-BC) and BACnet Revision 14 standards.

It was important for WAGO developers to support the EtherCAT fieldbus protocol, which significantly increases the number of field devices that can be addressed and increases the PFC200 controller’s application range.

Thanks to several new functions, WAGO has significantly increased the application scope for its new generation of controllers. The new version now allows any EtherCAT slave to be integrated into a PFC200-based control system. With the ability to comprehensively configure the fieldbus, the PFC200’s new developments represent a tremendous innovation: programmers can specify which bus system should be supported with their existing hardware — nothing new is required.

KNX is the first and only smart home and smart building standard that meets the highest security...